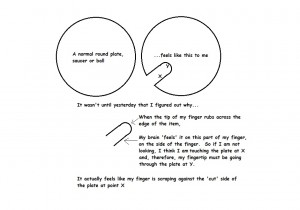 One oddity of ‘The Hand’ is that it feels holes in things and just in case anyone else is going through the same experience I drew up the above explanation.

Again Again Again… MEGA thanks to all the family, friends, fans and people I have never met who all expressed their concern over my accident (see past blogs).
I am now back to almost normal (was I ever?) and even did a magic show and presented an awards night a couple of nights ago. I wouldn’t go so far as to say I was nervous, but I had to make myself focus a lot more than I would normally.
In the past I would sail into any job on a wave of confidence, but now things felt a lot different and I knew that things ‘felt’ differently when I picked them up. The whole thing was being projected onto huge screens and Debbie watched from the wings on a monitor. Afterwards she said she had noticed nothing out of the ordinary at all….. what a relief.
Oddly I got a lot more response from that gig than I have beforehand and we had to pose for photos for an hour afterwards. So many comments like ‘I simply never realised before that you were so funny…’ Good.. that has set me up for the tour which starts next week. I have a panic week ahead getting it all ready.
Martin, my son, isn’t doing this tour with us and I have been lucky enough to book another funny guy for most of it, Kev Orkian. If you haven’t seen him you have no idea how talented he is. This is going to be fun.
The depression I felt has gone and my body, even though odd bits of it are still sore, is getting back to living the life. No… I am not going to talk about which odd bits.
It’s a beautiful day. I am going out to feed my robin.
Have fun
Posted in Blog | 6 Comments »

6 comments to The Damaged Hand