« Early Morning Thoughts
It’s going to be a Busy Year »

NOTE AS AT 10th February:

I have now received an offer to buy all the illusions below at their listed price so if you are keen to buy one or all of them, that is the price to beat. Good Luck.
P.S. An American friend visited last night and could not believe how cheaply these are priced. I agreed but I need the space by the end of next week.
So now I am coming to the end of the magic that I have stored for so many years and I fear the ending is not going to be easy for me.
Today, for example, one of my favourite illusions failed to meet its reserve price and so it will go to the bonfire. I don’t believe I should let these items go for nothing even though they do need a lick of paint in some cases.
Magicians have asked me what there is left of the big stuff so here is the list.
A. THE BACKSTAGE ILLUSION
This is my own design (and my father built it) of a very well known ‘plot’ wherein the magician performs a quite baffling illusion to produce a girl. Using any excuse (a special treat for someone in the audience, the musical director’s birthday, whatever) the magician says that he will show everyone how it is done because he isn’t going to ever do it again, so why not? He will even face the other way so that they will see it in detail.
The curtains open and indeed there is even an audience on the backcloth (not supplied) and the magician performs the whole routine again. Normally there are two boxes involved and the real audience get to see the girl crawling about. In my version it is much more comfortable for the assistant because there is only one upright box.
You can see the routine here http://www.youtube.com/watch?v=d7B0lf_CR0A and it is interesting to note that the two ‘stagehands’ sweeping up are Ali Bongo and Gil Leaney, bless ’em both.
Offers over £650 to danillusions@gmail.com Note that this email address is only used for this illusion sale and will be inactive after 10 days.
B. THE TRIPLE TRUNK MYSTERY 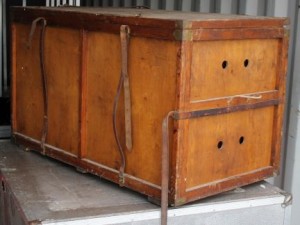