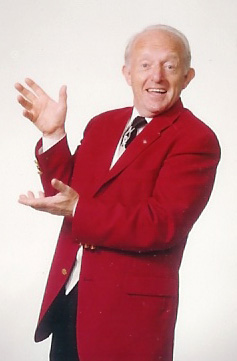 Father:
Handel Newton Daniels
(sadly no longer with us)

In the world of television magic, no one has enjoyed more success than Paul Daniels. From the moment he burst onto the ITV network, and later switched to the BBC, his magic shows topped the ratings. A recent book on TV facts calls him the most successful TV magician of the 20th century. His creative genius enabled him to produce consistently stunning shows, never rivalled in spectacle, covering the full range of the world of entertainment magic, from small, ‘close-up’ effects, to enormous outside broadcast illusions.

With a reputation as one of the most popular society and show-business entertainers, Paul has entertained The Royal Family including Princes William and Harry, The Sultan of Brunei, The Sultan of Oman, Prince Rainier of Monaco, Barry White, John Major (Prime Minister), James Callaghan (Prime Minister), Princess Michael of Kent, The Duke and Duchess of Wessex, and countless others.

His fame and achievements are not confined to the UK where he is a household name. The USA, Canada, New Zealand, Germany, Spain, and Japan have all recognised him as a world-class entertainer. Amongst his numerous achievements, he has starred in his own hugely successful West End Theatre Show, headlined in Las Vegas and Broadway, as well as performing more unique magic on TV than any other magician in history.

His TV career has not been limited to performing magic. As a presenter, he has hosted some of the most enjoyable game shows on TV. ‘Odd One Out’, ‘Every Second Counts’ and the highly rated ‘Wipe Out’ have all had great success in the battle for viewers. There was also the wonderful ‘Wizbit’ children’s series, which featured a world of magic and wonder for the younger viewer. Always in demand as a guest on talk-shows, Paul’s vibrant personality and love for magic make for a fascinating viewing, and his endless supply of stories and anecdotes from a lifetime in show-business make for riveting viewing.

Despite all the success of TV, it is in the area of live shows that Paul’s talent really shines. Be it in cabaret, after dinner, outdoor stadium or the grandest of theatres, or the private homes of the rich and the famous, Paul Daniels’ ability with magic and humour is always a winner.

For fourteen months Paul starred at the Prince of Wales theatre in the heart of London’s West End, something no other variety entertainer had been able to do for decades. Other short seasons in London’s West end have even included appearing in the Moliere play ‘School for Wives’ at the Comedy Theatre.

On Radio, he was a BBC Radio 2 DJ for six months and for years presented a game show called ‘Dealing with Daniels’.

When Paul played the part of Scrooge in the Christmas Carol play, the critic was so impressed she bought tickets to see it again!

In the world of special effects, many people do not know that he has designed special effects for stage and screen including, Cats, Phantom of the Opera, the film of Return to Oz and many more. He was also commissioned by the English National ballet to create magical effects for The Nutcracker.

Paul Daniels has entertained many millions of people from all walks of life both in this country and abroad. He continues to enthral audiences of all ages with a unique comedy style that never fails to impress, resulting in a truly magical and memorable experience for all.

PAUL DANIELS – MOTIVATOR
In recent years, Paul has developed a career in motivational speaking. In the UK, USA, New Zealand and Australia, a wide range of business people have taken on board Paul’s motivational teachings.

Through his motivational work, Paul is able to teach business men and women show-business techniques to make speeches and presentations. He can also demonstrate how the simplest methods of magic effects can help to make company personnel more memorable to their clients and associates. Paul is also able to demonstrate how to move into a more ‘powerful personality mode’ before you enter a room.

Paul has built a successful career in this field, and time and again the comments from his clients all say that Paul’s presentations are the most entertaining motivational events the have ever attended.

AWARDS
– The Cock of the North.
– Male Entertainer of The Year.
– Variety Club of Great Britain ‘Show Business Personality of the Year’.
– Hollywood Academy of Magical Arts & Sciences ‘Magician of the Year’.
– Lewis Ganson Award.
– Golden Rose of Montreaux.
– The Magic Circle ‘Maskelyne’ Award for Services to British Magic – this is their highest award.
– The Murray Award.
– British Magical Society ‘David Berglas Award’ for ‘Outstanding Contributions to Magic’.
– New York, Tannens ‘Louie’ Award for Services to magic.
– International Magicians Society, ‘Merlin’ Award for Continuous Achievement.
– The Golden Grolla, an Italian award for services to magic
– The Gran Hada award presented by the Mayor of Granada for services to magic